The origins of Roadstone go back to the early 1930’s when two young Dublin brothers Tom and Donal Roche started a sand and gravel haulage business with a Bedford truck operating from a small yard at Inchicore in the suburbs of West Dublin. Initially called Roche Brothers it later became the Castle Sand Company and developed steadily during the 30’s and 40’s. The brothers launched a new company, Roadstone, on the Irish Stock Exchange in 1949. They were supported in this venture by John A. Wood who had his own sand, gravel and quarrying business in County Cork and which later joined with the Roadstone Company. 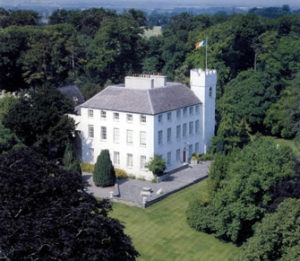 The early years were not easy for the fledgling Company. The Irish economy and the construction industry languished during the 1950’s and although Roadstone continued to expand the company did go through difficult times. However during the 60’s Ireland entered a period of rapid economic growth and it was then that management acquired key geographic land acquisitions with sound underlying stone reserves in preparation for the future. Some of these reserves continue to prosper today.

Tom Roche led the engineering and production side of the company while Donal Roche had the difficult task of ensuring finance and administration kept pace with growth of the company. At this time the company also cultivated key people who brought new professionalism to planning, development, investment and people skills.

In parallel to this story, the Irish cement industry, previously a state body was also developing rapidly. By the end of the 60’s, Irish Cement had become the largest industrial Company quoted on the Irish Stock Exchange with Roadstone the third largest. In 1970 the two Companies merged to become Cement-Roadstone Holdings now known as CRH plc. CRH is the largest building materials company in North America, a regional leader in Europe and has a growing presence in the Asian economies of India and China.

CRH manufactures and supplies a range of integrated building materials, products and innovative end-to-end solutions which can be found throughout the built environment in a wide range of construction projects from major public infrastructure to homes and commercial buildings.

A Fortune 500 company, CRH is a constituent member of the FTSE 100 Index, the EURO STOXX 50 Index, the ISEQ 20 and the Dow Jones Sustainability Index (DJSI) Europe. CRH is ranked among sector leaders by Environmental, Social and Governance (ESG) rating agencies. CRH’s American Depositary Shares are listed on the NYSE.